John Kennedy Hampton was elected to the Connecticut General Assembly in November 2012 to represent the 16th House Assembly District of Simsbury.

Hampton is Vice Chair of the Aging Committee and is a member of the Children's Committee and Commerce Committee. He also serves as Deputy Majority Whip.

Prior to the legislature, Hampton served on the Simsbury Board of Selectmen from 2003-2012, including five years as Deputy First Selectman. During his tenure, Hampton was a strong advocate for transparency in government, environmental stewardship, and supported programs for senior citizens and veterans.

Highlights of Hampton's accomplishments include creating the Clean Energy Task Force, starting the Simsbury Volunteer Expo, partnering on the Martin Luther King in Simsbury documentary and celebration, and initiating the Town of Simsbury Annual Holiday Collection for the Veterans Home in Rocky Hill.

In 2011, Hampton convened the first-ever Simsbury Senior Summit to raise the visibility of aging issues and to seek meaningful measures to improve the lives of senior citizens.

For his work on behalf of veterans, Hampton has been honored by the Abigail Phelps Chapter of the National Society Daughters of the American Revolution (DAR) with the Essential Piece Award in 2011.

As chair of the Simsbury Public Safety Subcommittee, Hampton worked with police, fire and emergency personnel on town-wide emergency preparation and response. He was also a member of the Personnel Subcommittee and served as liaison to the Aging and Disability Commission and the Simsbury Farms Complex Committee.

Hampton has also served on the Zoning Board of Appeals, the Aging & Disability Commission and is a Justice of the Peace.

Hampton's community involvement extends beyond Town Hall. A life-long town resident, he is active in the Tariffville Village Association, the Farmington River Watershed Association and the Simsbury Main Street Partnership.

Hampton is a 1984 graduate of Northwest Catholic High School & and received a BA degree in English from the University of Hartford in 1990. Hampton is a former staff member of the House Democratic caucus, serving as Clerk of the Joint Committee on Executive & Legislative Nominations from 2000-2004. 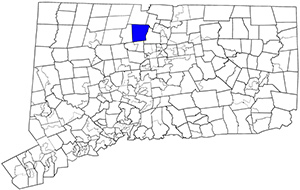