On Saturday, April 29th, there's a nationwide Here To Stay rally to show support for immigrants and immigrant rights. In Connecticut, supporters of Here To Stay will gather on the North Steps of the State Capitol in Hartford between 1 and 3 p.m. 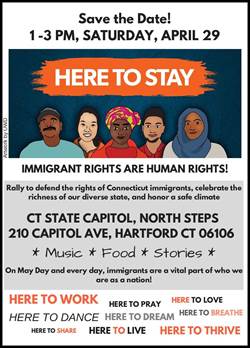 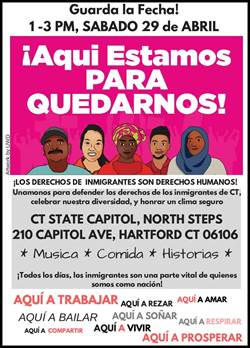 Here To Stay will be a reminder of our nation's diverse culture and heritage. Thousands are expected to turn out to hear the success stories of local immigrants. Activists will defend immigrant rights and the foundation of pluralism and diversity that our founding fathers believed in. There will be food, music, and much more.

Show Washington that the negative portrayal of immigrants during the presidential campaign does not define Americans and who we are. Stand with me on Saturday and send the message that we will not allow the cruel and bigoted treatment of immigrants -- or anyone.