Julio Concepción serves as the Executive Director of the Hartford Chamber of Commerce after 11 years in the role Vice President of Hartford Partnerships for the MetroHartford Alliance. In this capacity, Julio is the liaison between Chamber Investors and the City of Hartford, its elected and appointed officials, its departments and, most importantly, its neighborhoods.

He is House Chair of the Executive and Legislative Nominations Committee and serves on the Finance, Revenue and Bonding and Transportation Committees.

Julio has also served as Chairman of Hartford Crime Stoppers, Chairman of the Young Professionals Taskforce and on the boards of Camp Courant, Knox Foundation, Theaterworks Hartford and United Way of Central and Northeastern Connecticut.  He is currently an active board member of the Greater Hartford YMCA, the Downtown Business Improvement District, Hartford Stage and Riverfront Recapture.

From 2005 to 2007, Julio served as Community Liaison and Assistant to the Mayor of the City of Hartford, where he focused on resolving constituent issues throughout Hartford. In March of 2010, he was elected to serve in Hartford’s 5th District Town Committee and in 2011 he was chosen as the Grand Marshal of the Puerto Rican Day Parade and as a Hartford Business Journal “40 under Forty” winner.

In 2015, Julio was elected to serve on Hartford’s Court of Common Council, where he was selected by his peers for role of Majority Leader. He was elected to Connecticut General Assembly representing the 4th District (Hartford) in June 2018 and won reelection later that year and again in 2020 and 2022.

“I was born in Puerto Rico and moved to the Hartford Region when I was three years old, finally settling in the City of Hartford after graduating from the University of Connecticut in 2004,” explains Julio.

“My wife, daughter, and I enjoy living in Hartford. We love that there are so many things to do in walking distance—from great local restaurants to live music to events at Bushnell Park,” he adds. “There’s always something happening, and we are happy to be a part of this thriving, vibrant city.” 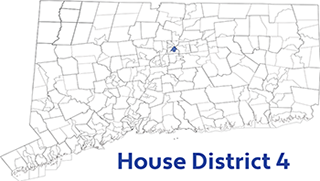