State Representative Maria Horn is proud to represent Connecticut’s 64th Assembly district, including nine towns in the northwest corner of the state.

A native of Ohio, Representative Horn earned her B.A. from Princeton University in 1986 and attended the University of Chicago Law School, obtaining her J.D. in 1993. Before beginning her law career, Representative Horn spent four years working in corporate finance at JP Morgan & Co. Her legal career included work as a law clerk for a federal judge, and the law firm Debevoise & Plimpton, before joining the United States Attorney’s Office for the Southern District of New York as an Assistant U.S. Attorney for the Criminal Division.

After relocating to Salisbury with her husband and three young children, Representative Horn chaired the boards of a domestic violence agency and a local school, served on the Salisbury Board of Finance, and raised funds to build the local firehouse and to create a program for local schools to prevent and combat substance abuse.

Representative Horn lives in Salisbury with her husband, three children, and their dog. 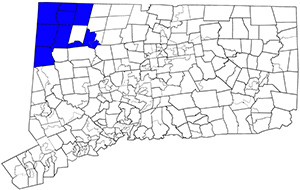