SB 415 Is Bad for Wallingford


I am actively fighting against a proposal that, if passed, would be detrimental to Wallingford’s wastewater upgrade plans.

SB 415, An Act Concerning Grants For Combined Sewer Projects, currently in the legislature’s Finance, Revenue & Bonding Committee, would take away millions of dollars in funding from various towns including Wallingford, Southington, Plainville and seven other towns if the Hartford area combined sewer overflows (CSOs) project grant funding is increased from 50% to 80%.

I offered testimony in opposition to this proposal because I feel strongly that if this measure advances, our towns will lose. Wallingford is about to undertake a significant upgrade to our wastewater treatment plant, which is 30 years old and not properly functioning, to meet Clean Water Act standards. This legislation, if allowed to pass, will definitely impede the town’s prospects to get it done.

The list of towns in danger of losing funding for wastewater treatment under SB 415 is below. 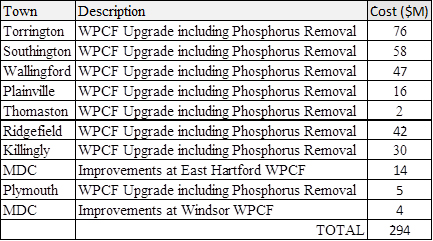 Under this legislation, if the Metropolitan District of CT (MDC) gets an 80% grant instead of the current 50%, that allotment would starve the Clean Water Fund that serves the rest of the state’s municipalities, because MDC is already the largest recipient of Clean Water Funds. The CT Department of Energy and Environmental Protection (DEEP) indicated which towns would lose if SB 415 passes.

This proposal would take $47 million away from Wallingford alone, not including millions lost to other towns’ projects that qualified for a 50% phosphorus grant under PA 16-57. The only way that I could ever support this measure is if the bill increased bonding in the Clean Water Fund by $83 million to cover the additional 30% grant for MDC, which is unlikely in this tough budget year.