On George Floyd and Policing in Connecticut


As I reflect on the horrible reality of George Floyd being murdered by a police officer in broad daylight, I recall use of force incidents by police officers in our own City and State. These past few days, I have been asked by many folks what we as a state have done and can do in response.

By way of background, in June of 2019, I worked with my Judiciary Committee Co-chair, Senator Gary Winfield of New Haven, to pass Senate Bill 380, which narrows the instances when deadly force is justified.

On S.B. 380
The law now specifies that physical force is defined as likely to cause serious physical injury and includes a choke-hold or other methods of restraint applied to another person’s neck area. The Act also

I was proud to lead House passage of the bill and defended it in a 5 hour debate. The bill passed largely along party lines. 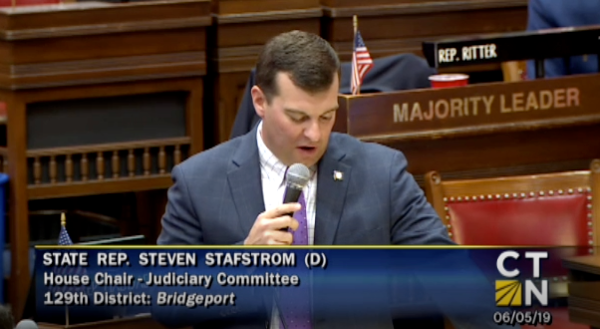 While the passage of the legislation was a step in the right direction, there is still much more that needs to be done to address the issues of police accountability, transparency, and racial equity.

In my capacity as Co-chair of the Judiciary Committee, I am committed to continuing to work to help police departments implement evidence-based changes in policies and training to reduce fatal police-citizen encounters. We must also continue to look at what use of force means and how it is implemented in the communities police are tasked with representing. Specifically, we need to consider issues of training and accountability related to what leads up to the actual use of force incident. The work to study these issue and craft policy changes has been ongoing.

But, changes in policing alone will not solve our issues. The sentiments we have seen spill out on street around the nation, including here in Bridgeport, is not just about a murder in Minnesota. It’s a reflection of unchecked racism, classism, income inequality, food insecurity and educational disparity.

Here in Connecticut, where many of these issues are particularly acute and where so much opportunity is driven by one's zip code, I think we can all recognize that to avenge George Floyd’s death and prevent the next one, we have to address these larger, systemic issues as well. Simply put: "If you want peace, work for justice."

I want to thank the demonstrators who are making themselves heard in a constructive manner and also thank our local law enforcement for handling the matter with appropriate discretion to date here in Connecticut. I add my prayers for George Floyd and his family and re-commit to the task ahead of us.