Back in 2019, Connecticut House Democrats made it a priority to pass legislation that focused on assisting working families by increasing the minimum wage over of several years until it reaches $15 in 2023.

Because of that vote, many Connecticut residents received a much needed and well deserved raise this month from $13 to $14 per hour. The minimum wage will finally increase to $15 on June 1, 2023. 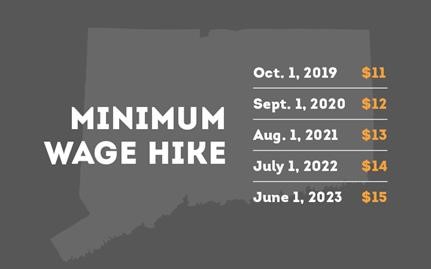 The Connecticut Department of Labor and Connecticut Voices for Children estimate those increases will raise wages for more than half a million people in the state by 2024. This increase helps all Connecticut residents because not only does it assist hard-working families, but it stimulates local economies by putting more money in people's pockets, which drives up spending and helps to pay household bills. This is especially true now with inflation pressures making it harder to make ends meet.

“Raising the minimum wage is going to benefit hundreds of thousands of people in Connecticut, especially people of color and working mothers,” said Rep. Robyn Porter, House Chair of the Labor Committee. “That extra disposable income for each low-wage worker will go right back into the local and state economies, benefiting our communities and local businesses and producing more revenue for the state. A higher wage also will bring more dignity into the workplace. In the end, all of Connecticut will benefit.”

That's why House Democrats stand in such strong support of this pay raise and the workers who will benefit from it.