This was a busy week at the State Capitol. After a 14-hour debate my colleagues and I in the House voted to approve a bill raising the current $10.10 minimum hourly wage over the next four and a half years to $15 an hour by June 1, 2023.

The extra disposable income that low-wage workers will earn will go right back into the local and state economies, benefiting our communities and local businesses and producing more revenue for the state. A higher wage also will bring more dignity into the workplace. In the end, all of Connecticut will benefit.

The gun bills we approved, which now go to the Senate, would allow Connecticut to continue being a national leader in sensible gun safety laws.

Better known as Ethan’s Law, HB 7218 would require that a gun, loaded or unloaded, be safely secured in the home so that individuals under the age of 18 cannot access the firearm.

The bill was prompted by the tragic death of 15 year-old Guilford resident, Ethan Song. While at a friend’s house, Ethan died after being shot with an improperly stored gun, and because of a loophole in state law, the owner of the gun could not be prosecuted.

Each year hundreds of thousands of firearms are stolen from vehicles and homes and are turning up in the hands of criminals who injure and kill people in communities across the country. House Bill 7223 requires the safe storage of pistols and revolvers in motor vehicles.

The need for this legislation was demonstrated by tragedies in Connecticut communities. In Hartford a 10-year-old girl was shot and killed with a gun stolen from an unlocked car in Glastonbury. The shots fired at the girl were intended for a relative who was somewhere else at the time.

A semi-automatic pistol stolen from a car in a Cheshire driveway was recovered after a robbery at a West Hartford shopping mall. Two handguns, out of 14 reported missing from a Bloomfield home, were recovered at two separate crime scenes in Hartford.

House Bill 7219 bans "ghost guns."  Made from kits of partially completed firearms that are easily purchased online, ghost guns have no serial numbers, cannot be traced and can be bought without a background check by felons.

The danger of ghost guns is very real. Ghost guns have been used in mass shootings, attacks on law enforcement and have been seized in criminal investigations, including in Connecticut. 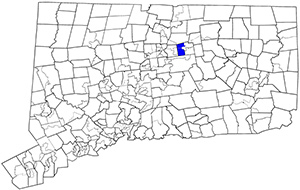