Mary Mushinsky was first elected to the Connecticut House of Representatives in 1980 on a platform of environmental activism, consumer advocacy and improved energy policies. She currently holds the leadership position of Deputy Speaker.

Mary has held various other leadership positions including co-chair of the legislature's bipartisan Program Review and Investigations Committee, specializing in preparing workforce for a changing economy, retraining older and long term unemployed workers, apprenticeships, and improving efficiency of state programs. The committee spotlighted and expanded the state’s most successful apprenticeship program, Platform to Employment. Mary previously served as co-chair of the legislature's Select Committee on Children for ten years and passed the state’s anti-bullying law. She is the recipient of numerous awards for adolescent pregnancy prevention and reduction of child poverty.

She also served for six years as co-chair of the legislature's Environment Committee. A biologist by training, Mary has been the chief proponent in the Connecticut legislature of major environmental legislation enacted during the 1980s and 1990s, including mandatory recycling, packaging reduction, open-space preservation, global warming mitigation and endangered species protection laws.

Mary served as a member of the Commission on Enhancing Agency Outcomes and the Results-Based Accountability Working Group to achieve greater efficiencies in taxpayer funded programs, as well as the Peak Oil Caucus to reduce the impact of high oil prices on residents and businesses. She currently serves on the Manufacturing Caucus and the Sportsmen’s Caucus.

In Wallingford, Mary initiated and serves as co-chair of the Quinnipiac River Linear Trail Advisory Committee, which works with local, state and federal officials and the community to expand the pedestrian/bicycle trail. She also served on the Wallingford Energy Conservation Commission, which promoted the energy audit and energy management recommendations now implemented by the Town of Wallingford school system. Mary is a member and legislative liaison for the Coalition for a Better Wallingford, which seeks to reduce drug and alcohol abuse.

Mary lives in Wallingford with her husband Martin J. Waters and has two adult sons, Martin and Edward Waters. 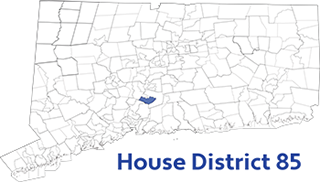