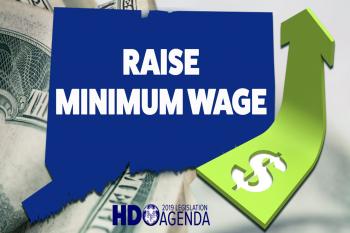 
Recently the state took another step closer to a $15 minimum wage after the legislature’s Labor and Public Employees Committee moved three bills concerning a minimum wage increase out of committee.

I was one of the members of the General Assembly who co-introduced minimum wage bills.

No one who works full-time should have to live in poverty, but many of our state’s full-time workers struggle to support themselves and their families because their wages are too low. Increasing the minimum wage would protect low-wage workers, grant them economic security, increase their purchasing power, and would enhance the state’s economy.

Connecticut’s minimum wage has not increased since 2014 when the legislature passed a $10.10 minimum wage that took effect in 2017. Our state was once a leader in advocating for workers’ rights to a fair wage, but we have stayed stagnant as our neighboring states like Massachusetts and New York have moved to increase their minimum wage to $15.

I am thankful for the committee’s diligent work and for everyone who came to testify or submitted testimony in support of these bills during the public hearing.

Every worker deserves to be paid fairly no matter their position or age and we must continue our push to do what is right for our working class.