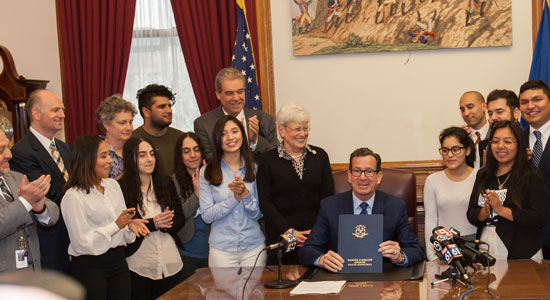 
Today Governor Dannel Malloy signed into law a bill I've championed for a long time that gives students who lack legal immigration status the ability to access a student-generated financial aid fund – a fund they are required to pay into.

These students are required to contribute to this pool of money, and yet they have been denied access to the very money they have contributed. Giving access to the pool is a matter of fairness. They are Connecticut students.

And yet, getting the legislation passed was not easy.

As the House chairman of the Higher Education and Employment Advancement Committee, I helped broker a bipartisan compromise that led to bipartisan support. Despite that, I had to stand on the floor of the House Chamber for seven hours this week to lead a discussion of the bill and convince colleagues to pass the bill.

In the end, the work paid off for everyone and proved that in Connecticut we can work across party lines on controversial issues to achieve results unlike in Washington, D.C.

Meet the requirements for in-state student classification or be an honorably discharged veteran of the United States armed forces;