In 2016 Liz Linehan was elected to represent the 103rd District, which now includes Cheshire, Wallingford, and Hamden in the Connecticut General Assembly.

In the 2017 legislative session, Liz introduced four bills that she successfully championed through House passage, three of which were signed into law by the Governor. These include a law to prevent discrimination against pregnant women in the workplace; anti-human trafficking legislation that creates a new crime known as “commercial sex abuse of a minor”; and a law to train police officers in communicating with and understanding autistic children, specifically those with a tendency to wander from their homes.

Liz was also proud to support the education-to-career pipeline by creating the first ever Student -->Manufacturer Connection Fair, pairing high school students with high tech manufacturers to inspire the innovators of tomorrow. An initiative born out of a meeting with an aerospace manufacturer in her district, Liz listened to the issues facing the manufacturing supply chain and sprang into action. The Student --> Manufacturer Connection Fair is now an annual event with several hundred in attendance.

In an effort to combat the opioid crisis, Liz partnered with the Regional Action Councils to provide proactive training to teachers, coaches, and administrators in Cheshire and Wallingford. Staff learned how to recognize signs of drug abuse in teenagers and how to appropriately intervene and refer a student to treatment. Known as the A-SBIRT certificate program, this training was provided at very little cost to the district - only five dollars per participant. Southington schools are slated to participate in the program in the beginning of the 2017-18 school year.

Prior to becoming a state representative, Liz served two terms as a member of the Cheshire Town Council. As a Town Council member, she fulfilled her campaign promise of limiting tax hikes, producing a budget with her fellow councilors that kept spending flat, with an increase of less than .1 mill over the previous year. At the same time, the Council was able to add valuable services like Full Day Kindergarten. She also created a series of free bi-monthly self-defense workshops through the end of 2016, after four women were attacked in Cheshire.

Liz attended Central Connecticut State University, majoring in Communications. As a lifelong Cheshire resident and outspoken advocate for women, families, children, and education, Liz is proud to serve the residents of the 103rd District. She lives in the west end of Cheshire with her husband Brian and their three children. 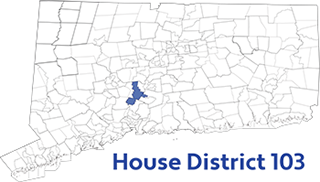